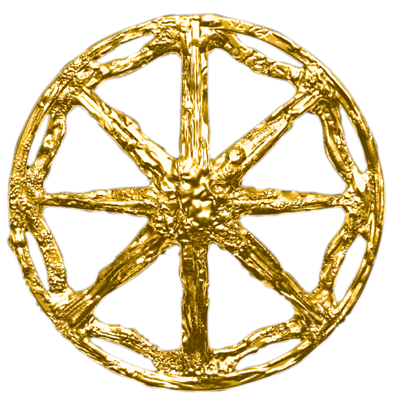 Doriana Richman is the founder and creator of Stone Symbol. The Collection was inspired by an ancient secret symbol, which emerged as a code to those seeking refuge with others of faith.

While touring the ruins of Ephesus, a once-thriving city in Turkey, Doriana spotted repeated symbols carved into the doorways of certain buildings and pathways. She easily recognized the ichthus or the “fish symbol,” which was a secret symbol of early Christians to avoid detection and punishment. However, she didn’t recognize the other symbol that resembled a spoked wheel. It wasn’t until she asked her tour guide did she find out what this strange symbol was.

Doriana’s guide shared that the symbol was a cryptic message to early Christians that others shared their beliefs. The symbol her guide explained is made by taking the first letter from the Greek words for Jesus (Iesous in Greek), Christ (Christos in Greek), God’s (Theou in Greek), Son (Yios in Greek), Savior (Sotor in Greek) and combining them. Together the five Greek Letters are IXOYE, literally meaning “fish” in Greek. But take those same first letters and overlay them one on top of the other and you will see the signature Stone Symbol which stands for, “Jesus Christ, God’s Son, our Savior.” Early Christians faced persecution and torture because of their faith, and so non-verbal forms of communication were used to identify believers and carved into marble to show the path to safe homes for those being persecuted.

IXOYE (ichthys) is an acronym for Iesous, Christos, Theou Yios, Sotor; which translates into English as ‘Jesus Christ, God’s Son, [Our] Savior’.

These are the five Greek “God” letters:

The overlay of the five significant Greek letters (Jesus, Christ, Son of God and Savior) produce Stone Symbol’s signature shape, recognized as the first symbol of Christianity, Unity, and a Spiritual Birth of Humanity. The Stone Symbol can still be found today, carved in the walls and walkways of the ancient, excavated city of Ephesus – where Doriana draws the inspiration for her entire Unity Collection.